Building forward better, Innovative Bangladesh Vision 2041 requires an uncompromising and relentless focus on ensuring Digital Equity – the idea that everyone should have the availability, accessibility and affordability of information technology needed for full participation in our society, democracy, and economy.

Different layers of the multi-channel, multi-platform digital service access architecture were designed to promote inclusion. A citizen who has no form of digital connectivity, not even a mobile phone, can avail government services from the nearest Digital Centre. A citizen who only has a mobile (bar or feature) phone (which is two-thirds of Bangladeshis), can simply dial ‘333’ to seek information and ask for services. If someone has a phone that can access the internet, they can get information from the Bangladesh National Portal website which hosts 51,528+ government offices under one umbrella. Increasingly, citizens are also able to access all government services from the MyGov App. 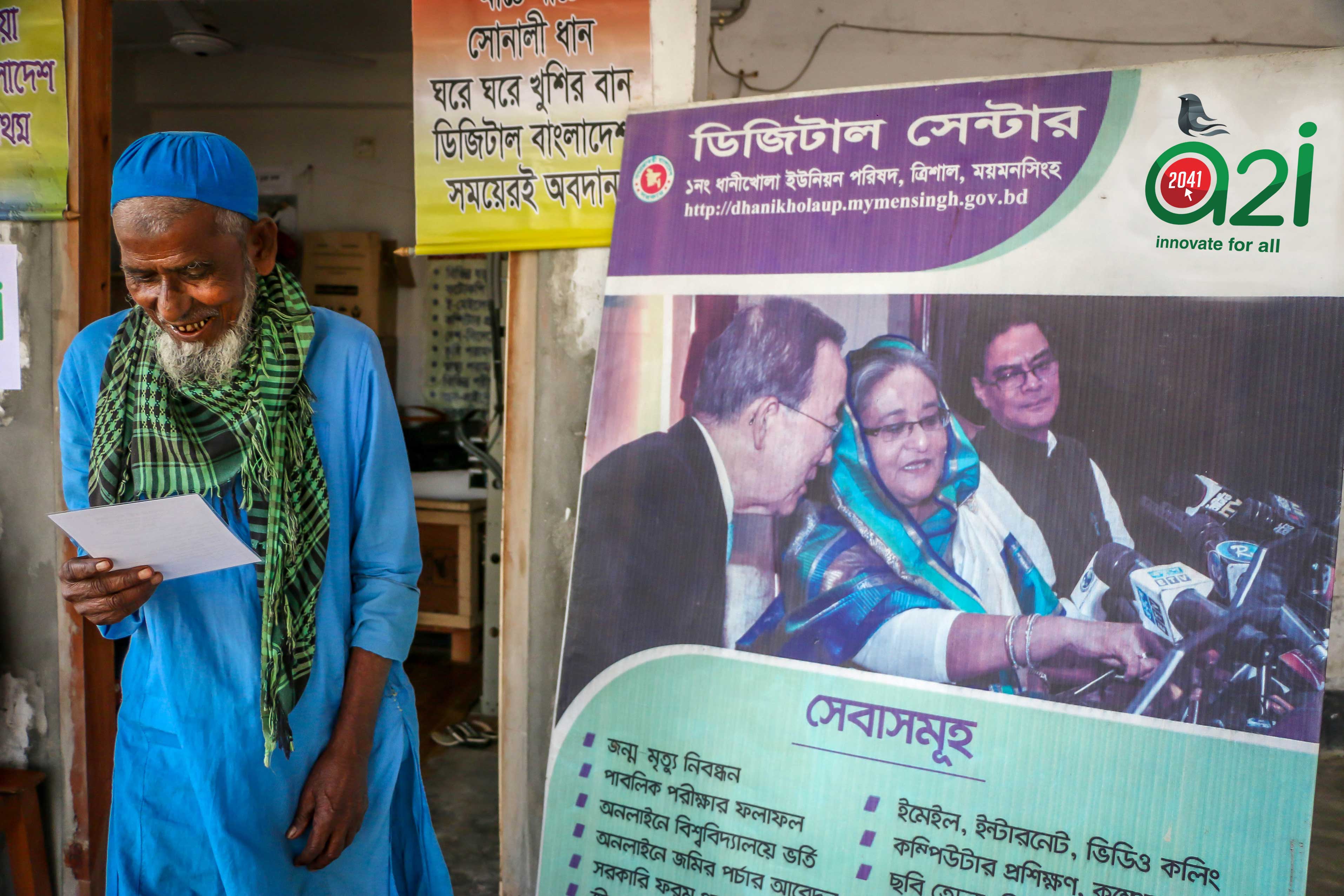 With the establishment of over 8,280 Digital Centres countrywide, the average distance that rural citizens need to travel to access government services has come down to a walking distance, approximately 4 km.

Digital Centres are one-stop shops that ensure that the underserved, such as women living in remote rural areas, people with disabilities and the elderly, regardless of their literacy and ICT knowledge, can access vital services. Each Digital Centre is located in a government office at the village level but run by two citizen entrepreneurs – one male and one female, to cater to the needs of women in conservative rural Bangladesh. They are not formally appointed as government employees and do not receive salaries or compensation in any form from the government.

16,085 Digital Centre Entrepreneurs, over 5,000 of whom are women, charge money for the provision of popular private services which cross subsidizes the free of cost provision of government services.

These one-stop shops thus represent a novel public-private partnership between public agencies, private sector companies and the Digital Centre Entrepreneurs – effectively establishing a microenterprise in grassroots level government offices – that allow the amalgamation of over 325 public and private services.

Earned by the 16K+ Entrepreneurs 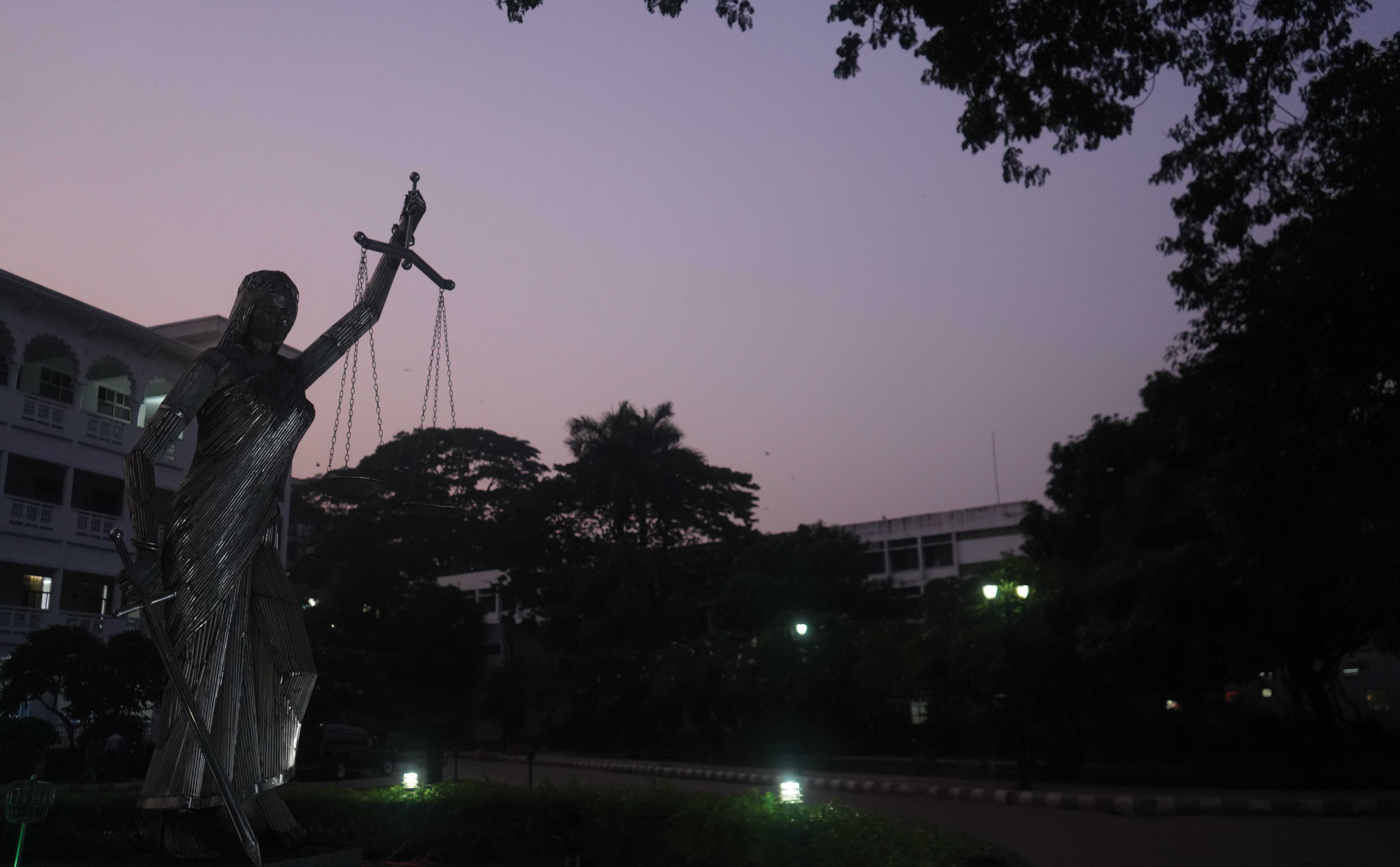 The COVID-19 pandemic disrupted an already overstretched court system in Bangladesh. More than 80 percent of all detainees are pre-trial detainees and health restrictions and lockdowns made physical court hearings nearly impossible. Meanwhile, jails and juvenile detention centers were filled to the brim. Overcrowding made physical distancing and personal hygiene practices difficult and put each prison at considerable risk of becoming a COVID hotspot.

Within 12 days of the Honorable President of Bangladesh issuing an ordinance introducing virtual courts, a2i repurposed a digital decision support system called ‘Nothi’ – which was already in use in nearly 12,000 government offices ensuring faster processing of citizens’ applications for services through the electronic movement of files across different administrative layers – to the context of a court.

During the months from May to June 2020, a2i trained thousands of judges, lawyers and court officials on the online system. During that time, 42,894 bail applications were received; 14,911 virtual hearings were held; and 10,523 people, including women inmates, were released on bail. This helped reduce the prison population by 11.95% in three months, a record in Bangladesh’s history.

Lower courts and tribunals across the country again cleared 137,330 bail hearings in 46 days in the midst of the second wave of COVID-19 which appeared in April 2021. 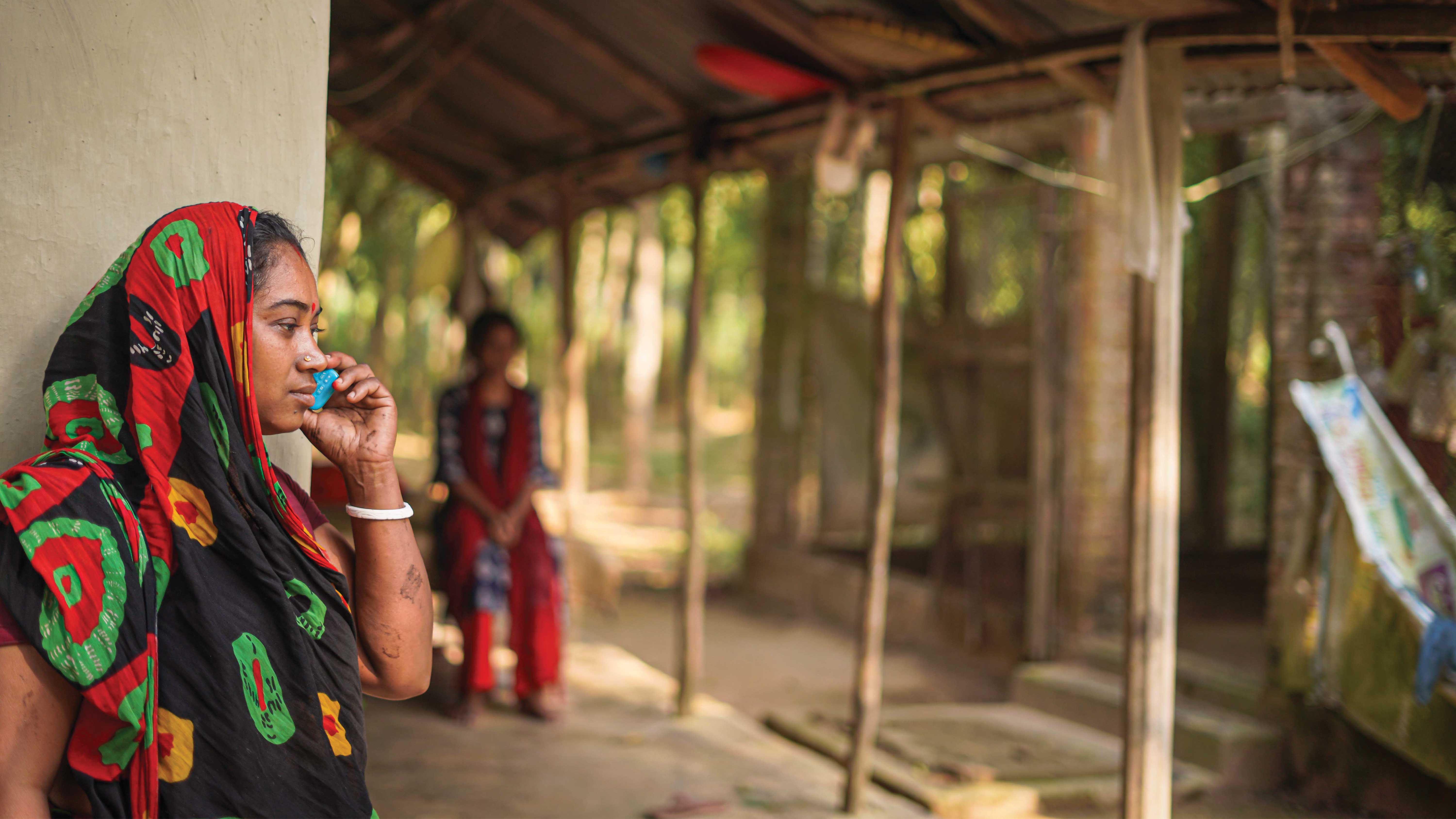 ‘333’ Bangladesh’s National Service Access Helpline, is a voice-enabled platform for citizens with low literacy and familiarity with technology. A farmer, for example, could dial 333 from even a low-cost mobile phone or landline and ask for a service. It also serves as a means for reporting grievances.

333 is designed to enable millions of people without smart phones (two-thirds of the Bangladeshi population). It takes advantage of the fact that our country of 163 million, now boasts around 180.25 million mobile phone connections and 90 million unique subscribers. According to a recent survey by LIRNEasia, Bangladesh has the highest percentage of mobile phone usage in South Asia. While smartphone penetration is currently at 41 per cent, it is commonplace for even a casual rickshaw puller or marginal farmers, the poorest of the social segment, to use regular feature phones not only for social interactions but also for money transfer.

Pioneered in 2018, it provides numerous types of assistance with nearly 73+ million calls received since its launch. During the pandemic induced lockdowns, it was repurposed to provide vital food relief and telehealth services to vulnerable citizens; forward calls to field administration; and prevent child marriages in collaboration with district and sub-district administration. 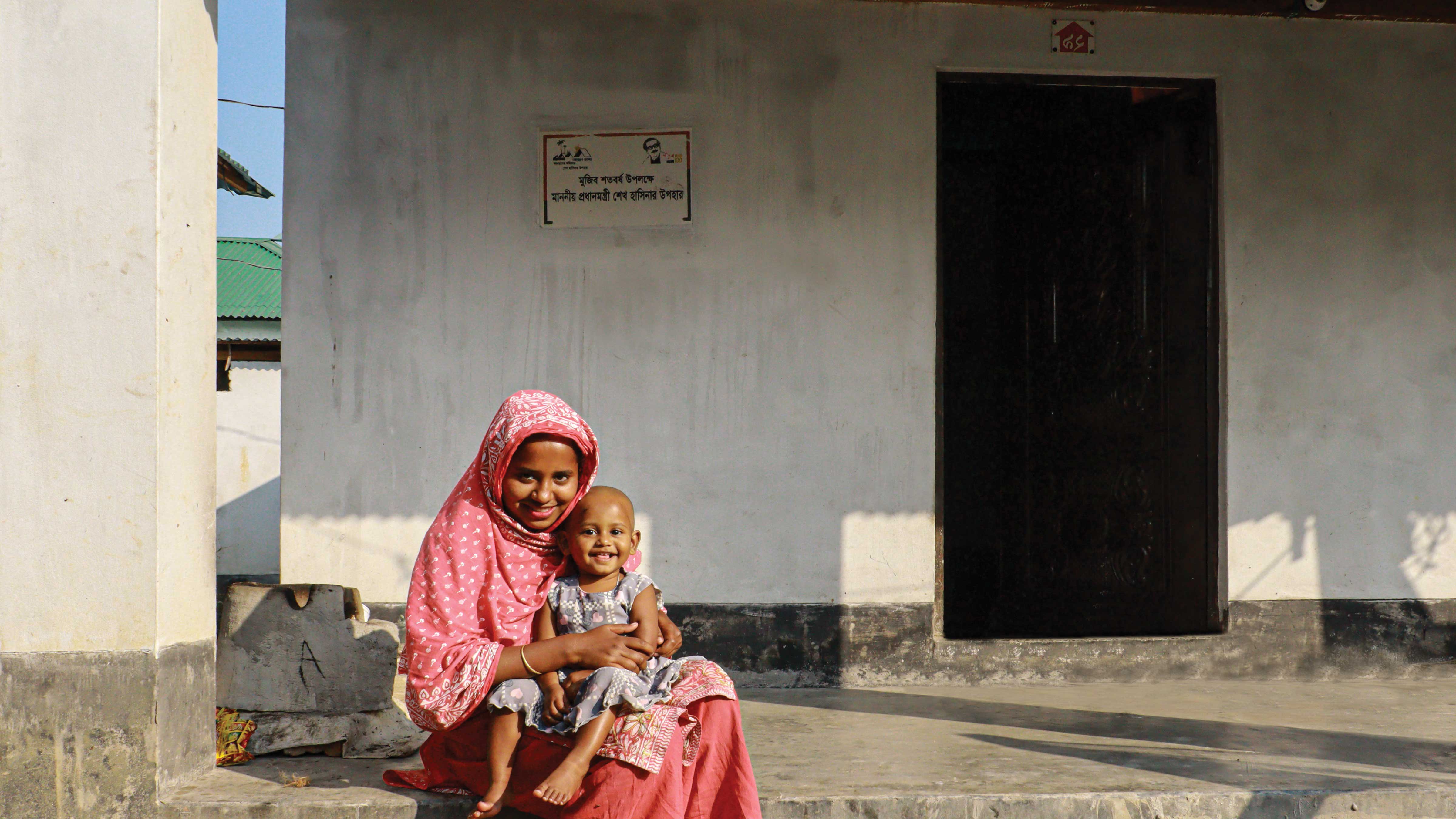 ‘Ma’ is Bengali for mother. Launched in June 2020, the Ma-Telehealth Center enables expecting mothers and lactating women with newborns can receive consultations from certified doctors, counselling services, e-prescriptions, and follow-up health services. In case of emergency medical conditions (requiring immediate medical advice, ambulance and hospitalization support), a call centre operator ensures end-to-end support for the mother until she is out of danger.

As the launch date suggests, it was the COVID-19 pandemic that prompted the initiation of this dedicated telehealth service as movement restrictions made it difficult for many pregnant and lactating mothers to physically access health care facilities. Moreover, many women preferred not to seek traditional healthcare services or physically visit clinics due to the fear of themselves being infected with the coronavirus or transmitting it to their unborn babies.

MyGov is a single, central platform that not only brings the digital services from all ministries onto one app, but also features all auxiliary services such as online payments.

MyGov allows citizens to look for service applications and information regarding services. It allows users to complete service applications, know the status of service delivery as well as make necessary payments. ‘333’, the National Service Access Helpline, is also integrated within the app. This helps users without internet access get information and request services and can even be used to locate the nearest Digital Centre. 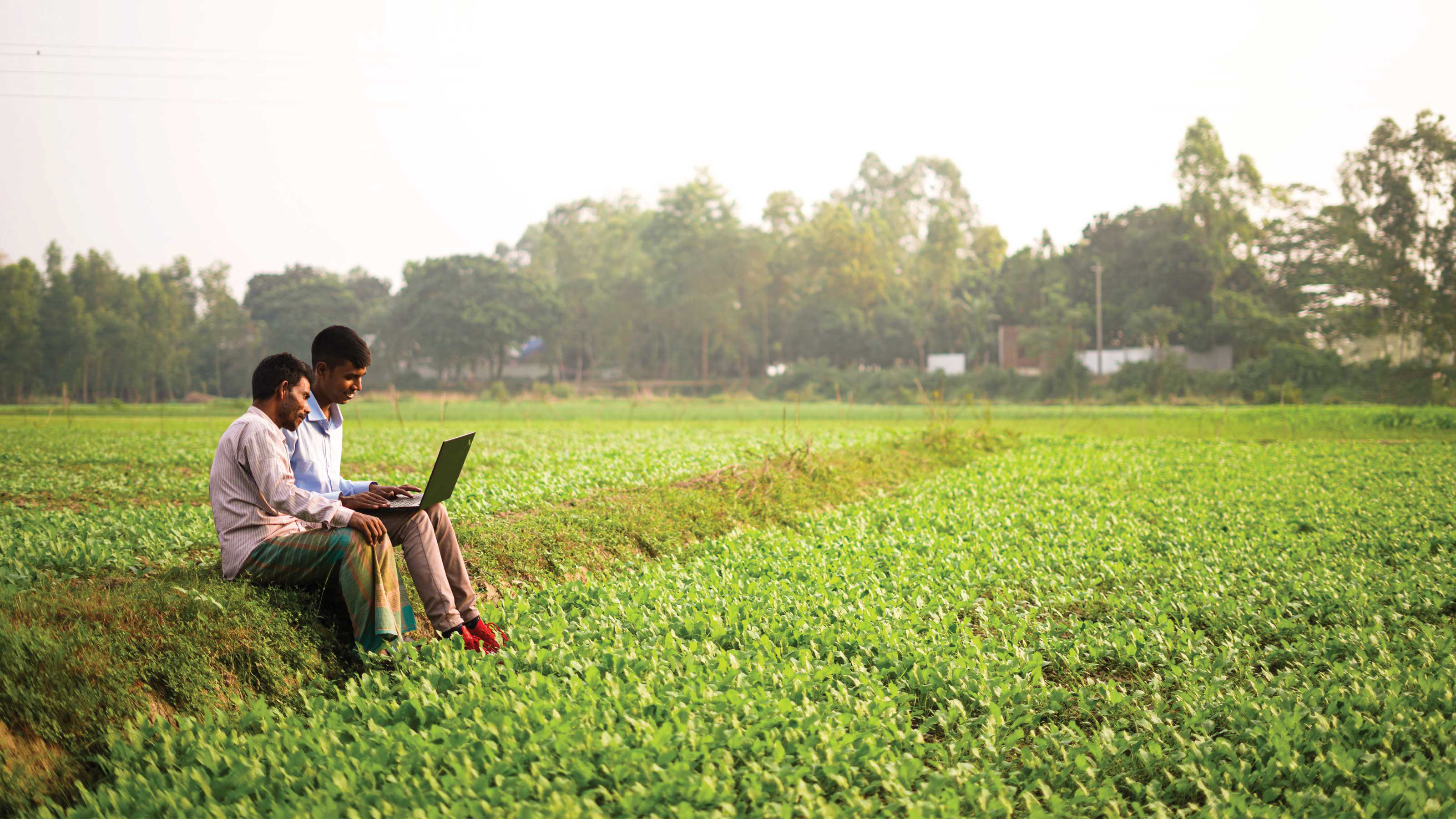 The National Portal was designed to bring over 51,528 government offices and literally thousands of application forms to the myriad citizen-facing services they provide onto one single web address, www.bangladesh.gov.bd. The forms are editable and can be submitted online.

The National Portal has been one of the chief initiatives of the Bangladesh Government in its endeavor to establish e-governance. It is the foundational initiative towards streamlining the free flow of information to the public from the Union Council (the lowest administrative tier in Bangladesh) to the Ministry level. Launched in 2007, the step to integrate portals for all 64 districts of the country in 2010 expedited the goal of uniting all government services under one platform. The mobile-friendly National Portal offers a convenient channel to obtain information from public offices without hassle. This saves time, cost and number of visits for citizens. Over 150,000 citizens access the portal each day. They can avail one of 685 e-services or access information from the 33,312 websites with 9.5 million thematic contents that the portal offers.

The National Portal has significantly supplemented citizens’ access to information and government services. 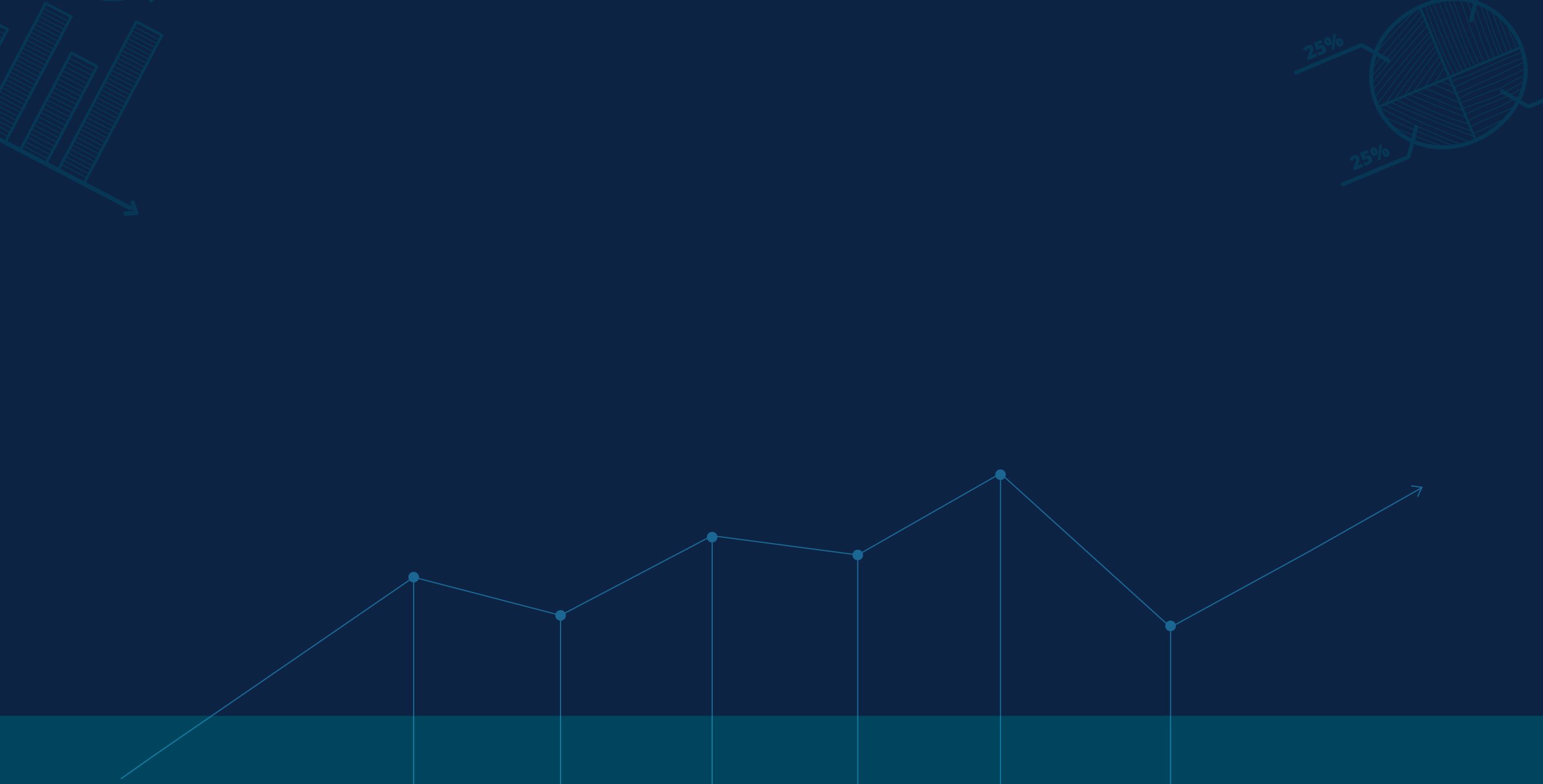 Digital E-Service for All (English)